How well do you know your horse? Can you tell when something just isn't quite right? In this blog, we will talk about identifying behaviors that could be telling you something is wrong.

Your horse may buck when he gets bitten by something, swish his tail when you tap him with the crop or show the whites of his eyes when he sees something scary. But, did you know that if these behaviors are exhibited frequently, especially without being provoked, your horse may be trying to tell you he is in pain. 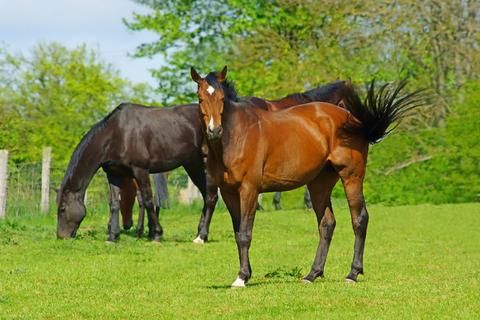 Sue Dyson, MA, Vet MB, PhD, DEO, Dipl. ECVSMR, FRCVS, head of Clinical Orthopedics at the Animal Health Trust Center for Equine Studies, in Newmarket, U.K., and colleagues developed and validated an ethogram for ridden horses. It's a catalog of behaviors a horse might display under saddle and what they mean. She designed the ethogram to help identify low-grade lameness or pain in ridden horses.

In her most recent study, Dyson compared horse behavior and pain scores before and after diagnostic analgesia (nerve blocks given during a lameness exam) to see if individuals with no specific training on the ethogram could use it to reliably recognize pain in horses working under saddle. She shared the results at the 2018 American Association of Equine Practitioners Convention in California.

"Horses are trying to communicate with us and we need to learn to listen."

Dyson said the original ridden horse ethogram contained 117 behaviors. In the current study, she and colleagues focused on 24 behaviors they identified as most closely associated with pain. She said the presence of eight or more of these markers likely reflects musculoskeletal pain.

In the study Dyson had one assessor trained in how to apply the ethogram and 10 untrained assessors (two veterinarian interns, one junior clinician, five vet techs, and two veterinary nurses) assessors each watch videos of 21 horses ridden in working trot and canter in both directions by professional riders, before and after diagnostic analgesia. The videos were presented in a random order, she said.

“The ethogram was applied in a binary fashion for each behavior: yes or no for the presence of the behavior,” she added.

The study horses had various diagnoses of unilateral or bilateral lameness in the front and/or hind limbs, kissing spines, or sacroiliac pain. Before veterinarians administered the diagnostic analgesia, the trained assessor identified three to 12 (with an average of 10) behavioral indicators of pain in ridden horses, Dyson said. After analgesia, the trained assessor pinpointed zero to six (an average of three) behavioral indicators of pain—a significant decrease in behavior scores, she said.

“The untrained assessors also had significant reductions in behavior scores for all the horses after resolution of pain,” she said.

Additionally, “the reduction in behavior scores verifies a likely causal relationship between pain and behavior,” she said.

Dyson and her colleagues also analyzed agreement among assessors—how often they independently came to the same conclusions about a horse’s behavioral indicators:

Based on these findings, Dyson concluded that both trained and untrained assessors can use the ridden horse ethogram to identify the likely presence of musculoskeletal pain. However, veterinarians, owners, trainers, and others using it require education on the ethogram for best results, she said. Below is the list of 24 Pain associated behaviors to look for in your horse.

If you see your horse exhibits these behaviors, you may want to have them looked at by your veterinarian.

For shoes to help with lameness issues check out www.Hoof-it.com

5 Reasons to Lease a Horse vs. Buying

So, you’ve decided that you want a horse for either equine sportor just because you would like to get out and trail r...
Read More

Does your horse suffer from hoof infections or ailments?

Okay, so I have never been a big believer in topical hoof dressings. I have always felt like they are more for the hu...
Read More

USING A VETERINARIAN VS. EQUINE DENTISTRY

You notice one day that your horse seems to be dropping grain out of his mouth as he’s trying to chew, having undiges...
Read More